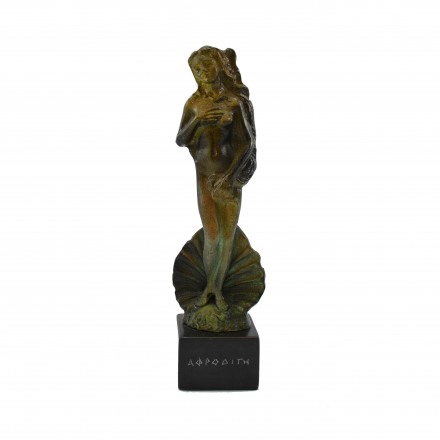 Aphrodite in ancient Greek mythology and religion is the goddess of love, beauty, sexuality, pleasure and procreation.

The corresponding deity of the ancient Romans was Venus (Latin: Venus), and presents many similarities with the Egyptian goddess Hathor. In this ought named the planet Venus.

As with many ancient Greek deities, there are several myths regarding its origin. According to Hesiod's Theogony, was born when Cronus cut off the genitals of his father Uranus and threw them into the sea. Since the foam came the goddess, hence its name. In Homer's Iliad, is the daughter of Zeus and Dione.

Because of its beauty, the other gods feared that competition with each other to win the favor would lead to war. Therefore Zeus arranged her marriage to Hephaestus, who, because of his ugliness and deformities, are not perceived as a threat. Venus had, however, many lovers, the gods, like Mars, and people like Anchises. He played an important role in the myth of Eros and Psyche, and caused the birth of Adonis, who later became her lover. Considered the mother of many deities and even smaller entities. The Trojan War, which largely sparked by helping Paris to abduct Helen, goddess sided with the Trojans.

Holy beings goddess was the myrtle, pigeons, sparrows, horses and swans. Venus is also known as Kythereia and Kyprida the two main places of worship, Cythera and Cyprus, who claimed that they are the place of birth. Thanks to the myth of ascent from the sea Venus widely worshiped as protector of seafarers, adjectives Pelagia Efploia and sea. Due to the link with the Mars god worshiped oddly and war goddess in Sparta with the epithet Areia, while armed and portrayed the Celestial Aphrodite in Kythira. Many local cults of attributing different names and traditions, however, the ancient Greeks recognized that beliefs are referred to a common goddess Venus.