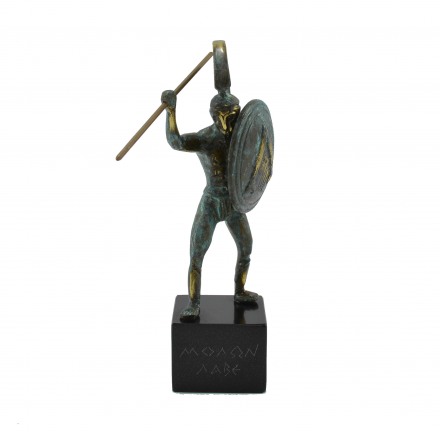 Leonidas A'(about 540 BC - 480 BC) was king of Sparta from the dynasty Agiadon. He was one of four sons Anaxandrides (Alexandridou or otherwise) from the first marriage of his father (Dorio, Leonidas, Kleombrotos), who believed that he was a descendant of Hercules.

Leonidas took over the leadership of the allied Greek army and managed successfully to keep them united and forget their differences. The military intelligence was apparent at Thermopylae by way arrayed military parts and the speed with which alternate on the battlefield. At the same time showed his heroism: when Xerxes sent him a messenger and asked him to hand over their arms and surrender, the Spartan king replied "Molon Labe", ie "Come and get it ', wanting so cause him to give battle and to prove its value.

King Leonidas fell fighting against the Persians at Thermopylae point and became a symbol of patriotic sacrifice. Facing numerous Persian forces Leonidas and 300 Spartans and 700 Thespians barricaded themselves at Thermopylae, where after betrayal of Ephialtes, exterminated all.