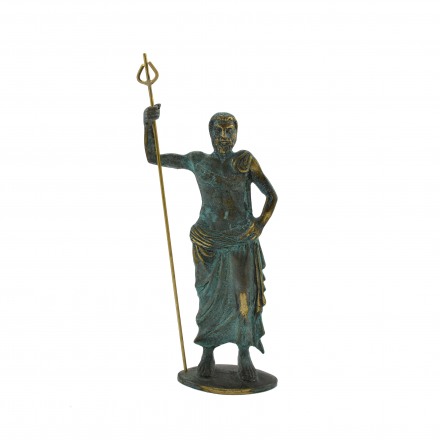 In Greek mythology, Poseidon is the god of the land and the sea (and therefore also called Pelagaios), rivers, sources and drinking water.

Son of Cronus and Rhea and brother of Zeus resided when Olympus and when the palace in the depths of the sea, where he lived and his wife, the Nereid Amphitrite. According to one version grew in Rhodes where, after their association with Alia, sister of Telchines, born six sons and a daughter, Rodi, who gave her name to the island. yet was the father of Theseus, and the Procrustes and sciron and giants: the twin Otou and Ephialtes (in association with iphimedeia, daughter of the Thessaly king) of Tityus (from Elara, daughter of Orchomenos and Orion (from Euryale, daughter of Minos. eximerotis even was considered the first horse but also a generator of the mythical horse Pegasus.

As god of the sea, Poseidon was traveling with golden chariot on the waves, which happily opened in its path, while around him played dolphins. With his trident could both create rough seas and calm waters. Patron saint of sailors and fishermen and even, as responsible for geological phenomena such as earthquakes, the offered sacrifices and prayers for soil stability and security of the buildings, and honored and racing. His symbols were the trident, fish (usually tuna or dolphin) and rarely the horse or bull.