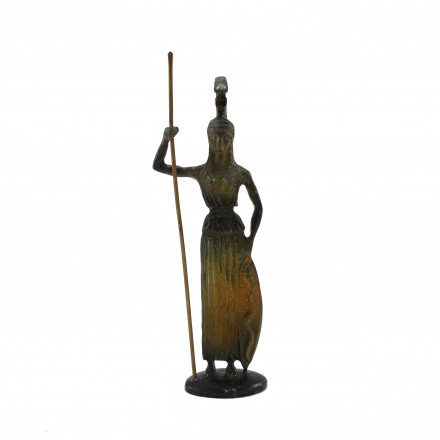 Athena, in Greek mythology, was the goddess of wisdom, strategy and war. Older types the name of the goddess were the types Athan (Doric) and Athens, and the name of Athena, which eventually prevailed, was derived from the adjective Athanaia that synairethike in Athenian> Athens.

Athena was the favorite daughter of Zeus. Mother was Metis, first wife of Zeus. Jupiter after prophecy learned that Metis would give birth to the child who would upset the power his father, when swallowed while she was pregnant to Athena. Later, Jupiter began to suffer from headaches and called Hephaestus to help him. Then Hephaestus with a big hammer hit the head of Zeus and popped Athena fully armed, wearing helmet and holding a shield. Seeing Jupiter, threw them at his feet, a sign of recognition as the supreme god.